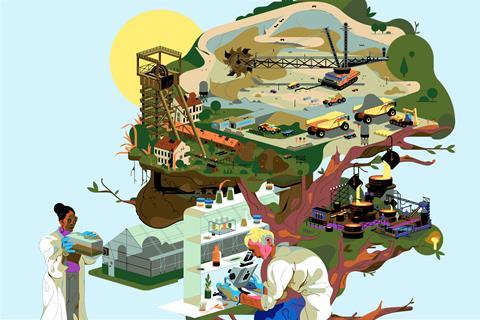 Are trees and plants the future of mining?

If I asked you to draw a picture depicting mining, what would it look like? People holding pickaxes and wearing dirty overalls and hard hats in a dark tunnel? Or would you produce an image resembling a Minecraft screenshot or a Bitcoin mine? What about a field of plants, would you have drawn that? I’m guessing not. But maybe you should have, since scientists around the globe are currently working on making the idea of using plants to mine metals a reality.

This concept of mining metals using plants is called phytomining. Plants that absorb metal compounds through their roots could be planted in contaminated soils, then harvested and the metals extracted for use in various industrial processes. Growing specific plants to remediate metal-contaminated soil isn’t a new idea but extracting the metals from these plants to make a commercially viable process is.

Plants suitable for phytomining are called hyperaccumulators because they accumulate large amounts of metals in their tissues and sap. Most plants don’t grow well in metal-contaminated soil, and the ones that can thrive mainly do so by leaving the toxins in the soil, not absorbing them. Hyperaccumulators, however, employ a different approach – happily sucking the metals up from the soil and storing them in various locations inside their bodies.

Inspire learners to imagine innovative chemistry careers with this two-fold problem that future chemists need to solve. The technological revolution relies on metals that are becoming increasingly more uneconomical to mine due to declining concentrations and the spoil from such operations has left a legacy of contamination. Introduce aspiring chemists to a more sustainable way of extracting the valuable metals needed that also offers an environmentally friendly solution to cleaning up contaminated land. 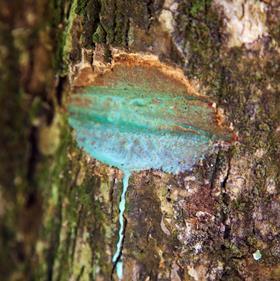 Source: © Antony van der Ent at the University of Queensland

Phytomining researcher Lorna Anguilano, from Brunel University London, has studied hyperaccumulator grasses growing in the orange-coloured sludge coming out of an ancient metal mine in Wales. ‘When you cut the grass and look at it, you can see that the leaves are full of metal,’ she explains.

‘Hyperaccumulators are astoundingly efficient at accumulating metals,’ agrees Antony van der Ent at the University of Queensland, Australia and the French start-up phytomining company Econick. The sap of Pycnandra acuminata trees, which grow in New Caledonia’s tropical forests, for example, can contain more than 25% nickel. ‘The sap of those trees is green, because nickel ions are green,’ explains Claire Hazotte, manager of Econick.

‘Hyperaccumulators are rare plant species,’ says Antony. ‘Only about 750 are known around the world, compared to more than 350,000 plant species described globally.’ These plant species have all evolved on soils that are naturally enriched in one or more heavy metal.

A set of differentiated classroom resources including a sequencing activity, interactive cloze and a storyboard. The learner resources are accompanied by a presentation and teacher notes.

‘The hypothesis is that hyperaccumulator plants evolved this trait as a defence against herbivores, such as insects, as most hyperaccumulated metals are highly toxic when ingested,’ explains Antony.

Some plant species hyperaccumulate all types of heavy metals, while others prefer to pick and choose. ‘The plant family we work with mostly, Agrostis capillaris, is actually quite flexible,’ says Lorna. The Agrostis grasses grow in lawns and fields all around the world. These grasses start by accumulating the most abundant metal in the soil and then switch as the concentrations change, Lorna explains.

The harvesting process used for phytomining varies. Grasses can be cut every few weeks during the growing season, many other perennial plants can be pruned periodically and non-perennials are pulled up from the ground with their roots still attached – like carrots are harvested.

The next steps also vary. ‘Typically, [our] harvested biomass is sun dried, then baled or pelleted and shipped to a metallurgical plant,’ explains Antony. ‘There the biomass will be burnt in a furnace to obtain ash.’ The ash is then smelted directly in an industrial electric arc furnace – these are more commonly used to make steel and ferroalloys. The nickel metal obtained can then be used to make nickel-based alloys, which have a variety of applications owing to their excellent heat and corrosion resistance.

Smelting is not necessary if metal compounds are desired instead. In this case, Econick uses a number of wet chemistry processing steps. First, the ash undergoes acid leaching to transform the metal into soluble metal salts. Then, the solution is filtered and careful precipitation processes employed to selectively crystallise out only the desired metal compound. ‘The ash [can be] dissolved in sulfuric acid [for example] and then purified using ion exchange technology to produce high-purity nickel sulfate,’ explains Antony. Nickel sulfate is extensively used as cathodes in lithium-ion batteries for electric vehicles. 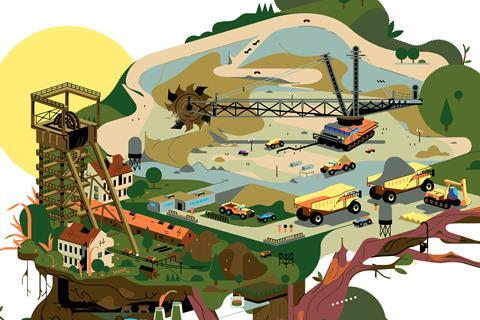 We might not be excavating for metals much longer. Instead we might be planting old mines with hyperaccumulators 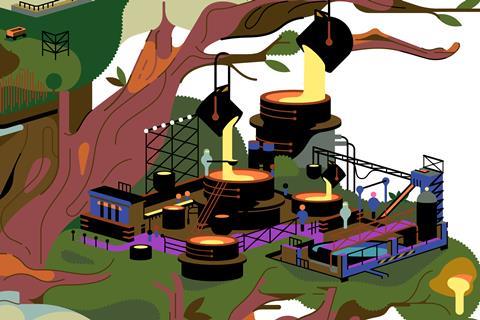 Smelting could still play a part, but wet chemistry has a role in the extraction of metal compounds from hyperaccumulators 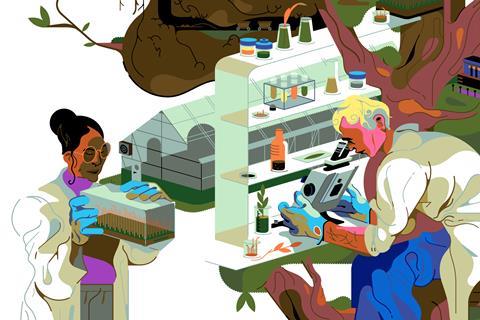 Phytomining isn't yet happening on an industrial scale, but researchers are already running field trials to demonstrate proof-of-concept

Not everyone doing phytomining starts by creating an ash. Metal compounds can be directly extracted from the plant biomass using organic solvents or ionic liquids. ‘We [then] need to transform these salts into whatever is required by industry,’ says Lorna. Lead oxide nanoparticles tend to be the target compound for lead, she explains. Commercial products containing lead oxide nanoparticles include dyes and pyrotechnics.

Wet chemistry reactions involving catalysts are typically used to transform the metal compounds collected from plants into commercially useful metal compounds. An alternative – and potentially cheaper and greener – approach being explored by Lorna and others is to use the enzymes naturally present in the plant biomass to catalyse the chemical transformations for them.

It is possible to extract the harvested biomass in a solvent to produce a broth containing lots of enzymes, explains Lorna. Broths containing plant enzymes are already being used by some chemists to catalyse the chemical transformations of metal compounds. Published examples include treating silver nitrate and the gold salt chloroauric acid with neem leaf extract to produce silver and gold nanoparticles.

Lorna is currently working on combining the extraction of the metal compounds and their chemical transformation into a single process. ‘We’re working on a one-step solution,’ she says.

To date, there has been no industrial-scale phytomining. Over the past six years or so, Lorna’s Brunel group has created a lab environment that closely resembles the ancient metal mine that it is studying in Wales. ‘We took samples of the water, samples of the soils and samples of the grass, so that we could build up a mock-up environment in our laboratory,’ she says.

The mock-up environment allows the team to perfect the growing and harvesting process without trampling over the Welsh mine habitat, which is a protected area due to the number of rare plants that grow there. One of the things the scientists are trying to determine is which plants are most suitable for phytomining at the mine. Lorna’s team is currently comparing the natural mixture of grasses found at the mine, with some new mixes containing plants that aren’t currently found at the mine but are present nearby. Lorna explains, it’s important to only grow plants native to the area.

The scientists are also exploring the commercial viability of their entire process – can they harvest and then extract enough metals or metal compounds to generate a profit? Lorna is pretty sure the answer is yes at the heavily-contaminated ancient metal mine sites. But what about in less contaminated areas? Her team conducted a citizen science project to explore this question.

Around 200 UK-wide residents signed up to grow grasses from seeds provided by the scientists in their gardens and allotments. The grasses were cut regularly and the cuttings sent to the lab. Lorna says the results were very promising. She is about to start a second similar citizen science project to explore this idea further.

Econick, meanwhile, is currently conducting larger field trials. ‘These sites are meant as demonstration metal farms to provide proof-of-concept under real operating conditions,’ says Antony. ‘The largest trials in Europe are in Albania where five-hectare field trials have been established for several years now,’ he adds. ‘Currently, we are upscaling a 1.5-hectare field trial in Sabah, Malaysia to 20 hectares.’

Like the Brunel scientists, the Econick team is working to identify the perfect native species for each location it is working in – ones that combine fast growth rate with high metal accumulation. Small flowering plants are currently being used in Europe. Alyssum murale, for instance, has been shown to yield 250 kilograms of nickel per hectare. But in Malaysia, hyperaccumulator trees are being grown instead.

Before phytomining can become mainstream several hurdles must be cleared. Some are technical, such as identifying the optimal plant species and perfecting extraction processes. But others are not. ‘We need major support and investment from industry to make commercial phytomining a reality at scale in various localities around the world,’ says Antony. Mindsets and regulations must also be updated, adds Claire. Currently, harvested hyperaccumulator plants are viewed as toxic products, when they need be seen as valuable resources. ‘It is very important to have new regulations,’ she says. Econick is currently working with the French government to resolve this issue.