A traditionally accepted view of ancient Roman art is they borrowed from, and copied, Greek precedents. The picture, however, is more complex and recent archaeological research indicates Roman art is highly creative.

A traditionally accepted view of ancient Roman art is they borrowed from, and copied, Greek precedents. The picture, however, is more complex and recent archaeological research indicates Roman art is highly creative.

Sometimes Roman art can be seen as a pastiche relying heavily on Greek but also encompassing Etruscan, Italic, and Egyptian culture. It is eclectic in style and application.

Influencing this range of art styles may be the fact that many Roman artists came from Greek colonies and provinces, so they brought with them their styles and techniques. It would appear that Roman artists had much Ancient Greek art to copy from since trade in art, books and teaching about Greek ideas was rife throughout the Roman Empire.

The ruins of Pompeii and Herculaneum were discovered in the 18th century near Naples (see map below). They have been described as towns frozen in time. Houses and villas with their furniture, food, people, jewellery and pets have been preserved. These sites opened a number of doors to the history of Ancient Roman art and the influences of Ancient Greece on Rome.

Map of the Bay of Naples and the Roman settlements affected by the eruption of Vesuvius in 79 CE.

© The Trustees of the British Museum

It was clear from the ruins discovered around the Bay of Naples that Roman society used art in a number of ways. Although there was much influence from other cultures there was a

The finds at Herculaneum and Pompeii could easily lead one to conclude that painting during the Roman period was predominately wall painting or frescos. However, that would be too simplistic a conclusion.

The insight we have today into Roman art is largely based on evidence resulting from two major events; an earthquake in 63 CE creating a need for redecoration, and the disaster of the falling ash from the eruption clouds of Vesuvius in 79 CE. Between them they helped to capture a microcosm of the Ancient Roman world and allowed us an opportunity to rediscover and study it.

Our knowledge has been enhanced in recent years by more systematic and scientific excavations.

From the excavations at Pompeii and Herculaneum it is clear the Ancient Romans decorated the interior walls of their houses with paintings executed on wet plaster, a general technique known as fresco (meaning on fresh plaster). There are many references to Roman art in other mediums such as wood, ivory, and other materials and the fact frescos are more durable and have survived well, even being buried under tons of ash, gives us a good reason to study them as a window to the other arts.

The most prestigious forms of art in the Roman Period were sculpture, which was often painted, and wooden panel painting.

However, like Greek sculpture, Roman sculpture was richly painted and gilded. This colouring was important. For example, Roman togas had different colours each of which indicated a different social status. If the sculpture has lost its colour, not much can be said about the social status of the carved person.

The Romans painted the sculpture using the same pigment paints as they used for painting onto the fresco walls. Roman artists used a wide range of pigments, painting media, and surface applications to embellish their marble sculptures. The Romans also quarried a range of coloured marbles and rock to create naturally coloured statues.

The burying, time spent buried and later restoration practices removed almost all the colour from the sculptures. However, there are fragmentary remains and through the use of microscopic examination, ultraviolet and infrared photography, and different types of material analysis it is possible to gain valuable insight into the original appearance of these ancient works of art.

The wooden panel paintings were painted using tempera or encaustic (from the Greek word enkaustikos to burn in). Encaustic painting uses beeswax heated to a liquid and coloured pigments are gently stirred in to form the paint, though oils have been known to be added possibly to thin or help bind the pigment. The surface to be painted, which can be either wood or canvas, is prepared by painting it with a thin plaster. The paint is applied to the surface using special brushes or metal spatulas. These metal tools can be heated and so be used to shape the paint for fine detail. Because wax is used as the pigment binder, encaustics can be sculpted to give the painting texture as well as form. Other materials can be encased (collaged) or layered into the surface. Encaustic is a technique still used today.

Unfortunately, since wood is a perishable material, only a very few examples of such paintings have survived; namely the Fayum mummy portraits from Roman Egypt that have survived in the dry atmosphere of the desert.

These Fayum portraits date from the 1st century BCE Roman period, or the early 1st century CE, and continue into the 3rd century CE. It is not clear when their production ended but it continued into Byzantine and Western traditions in the post-classical world, including the local tradition of Coptic iconography in Egypt.

The portraits were attached to burial mummies at the face. Almost all have now been detached from their mummies and are in museums. Some 1000 Fayum paintings exist in collections in Egypt, the Louvre in Paris, British Museum and Petrie Museum in London, the Metropolitan Museum of Art and Brooklyn Museum in New York, the Getty in California, and elsewhere. See examples below: 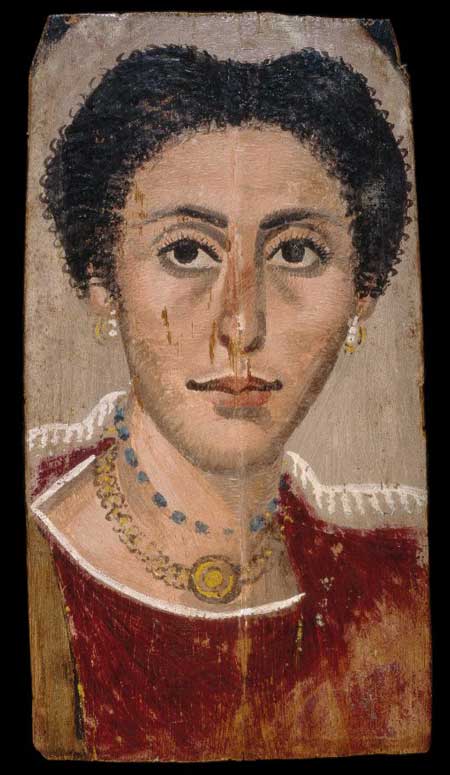 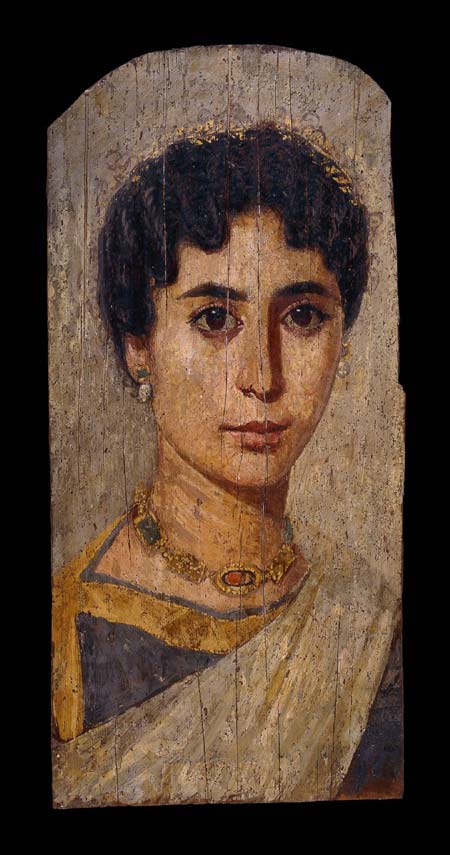 They usually depict a single person, showing the head, or head and upper chest, viewed frontally. The background is always monochrome, sometimes with decorative elements. They are realistic, though variable in artistic quality. There are indications that the art form was widespread but due to climate many did not survive.

Today scholars are studying these mummy paintings using non-invasive high-tech tools. At the Ny Carlsberg Glyptotek museum in Copenhagen, scientists have used luminescence digital imaging to analyse one portrait of a woman. The results indicated the extensive use of Egyptian blue around the eyes, nose and mouth, perhaps to create shading. They also detected Egyptian blue mixed with red ochre pigment being used to paint the skin and the effect enhances the illusion of flesh.

The Romans are well known for their architecture, which can be seen across Europe, Northern Africa and the Middle East. The Greeks were known for their columns and temples but the Romans developed the arch, vault and dome, and used these both in grand and general city buildings. Importantly the Romans developed the craft of making concrete. This ensured many of their buildings would survive the ravages of time and can be seen in buildings such as the Pantheon in Rome.

The Romans built many triumphal arches across their Empire and on these they used relief sculpture and inscription to carry historic and commemorative messages. The narrative technique used to decorate the entire surface of these commemorative arches was also used for funerary art to decorate tombs. 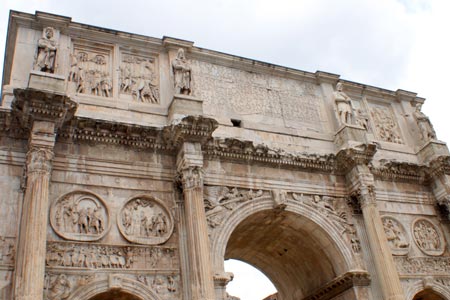 The Romans took on from the Greeks the art of mosaics, and developed it to become an important aspect of domestic decoration. The decorative arts included fine silver and glassware, such as the Portland Vase, and jewellery of amber, precious gems and gold.

Over time the Roman Empire expanded and took its art and architecture, mosaic, theatres, temples and statuary to new cities and villas across the Empire. So today, examples can be found or seen from Hadrian’s Wall in the North of England to Leptis Magna in North Africa, or Istanbul in Turkey in the east to Emerita Augusta in Spain in the west. Though other civilisations finally overran the Empire and brought their own arts and traditions, they seem to have held the Roman culture with awe and wonder, so much so they adopted and adapted aspects of Roman art, as well as their laws and religion, such as Christianity.