This resource accompanies the Eduction in Chemistry article Any old iron.

Researchers at Eindhoven Technical University (TU/e) in the Netherlands are investigating the redox reaction between iron and oxygen to form iron oxide as a way of storing renewable energy. This reaction is an example of a redox reaction because as the iron is oxidised the oxygen is simultaneously reduced.

This is easier to see if we show the charges on the ions in iron oxide. 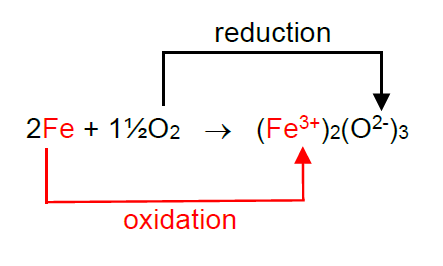 The Fe atom has lost three electrons to become a 3+ ion and so has been oxidised.

We show this in a half equation in which an electron is represented by e-.

Each oxygen atom has gained two electrons to become a 2- ion and so has been reduced.

For each of the displacement reactions in the downloadable worksheet learners will need to:

In the two final examples learners will also need to write the symbol equation for the displacement reaction.

Remember, if a metal is a transition metal (or has a different charge to the group it’s in) the charge on its ion is shown in Roman numerals after the metal in the compound’s name, eg iron(III) chloride contains iron as an Fe3+ ion and has the formula Fe3+(Cl-)3.