Make bubbles of carbon dioxide, hydrogen or methane in this demonstration exploring density, diffusion and solubility

This entertaining demonstration will suit open days, or lessons in which students discuss the properties of carbon dioxide or hydrogen. It touches on a number of key areas in chemistry, including density and solubility of gases, sublimation and combustion. Each of these areas could be explored in more detail, depending on the level of the group.

Watch this video demonstration in which bubbles of different gases, including carbon dioxide, hydrogen or methane, are shown to float or sink in air

The time for carrying out the demonstration should be about ten minutes.

How to make the bubble pipe for blowing gas bubbles 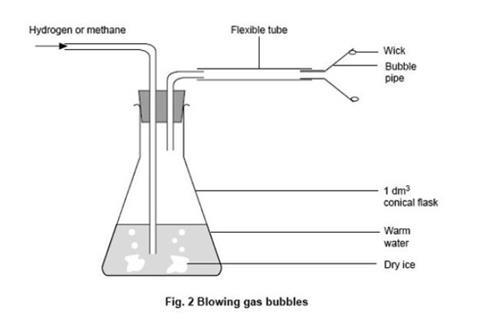 How to set up the equipment for blowing bubbles of carbon dioxide, hydrogen or methane

The demonstration first of all shows the difference in density, relative to air, of the two gases.

The rate at which gases diffuse depends on their molecular masses (quantified in Graham’s Law of Diffusion). Thus hydrogen and methane diffuse faster than carbon dioxide or air. Students may have noticed that cheap, ordinary balloons filled with helium usually deflate much more quickly than the more expensive foil-lined type sold in various shapes, such as hearts. This is because helium diffuses through the cheap balloon’s rubber membrane more quickly than the air diffuses in. The material of more expensive balloons is less permeable to gases.

As hydrogen and methane having similar solubilities in water to the gases in air, one might expect lighter than air bubbles to shrink in air as the lighter gas diffuses out faster than air diffuses in. The floating bubbles unfortunately seldom last long enough for this to be seen.

The sublimation of dry ice is worth pointing out here. A small lump left on the desk will disappear without melting, although it may become covered in some ice. Students may be aware of the use of dry ice to generate a fog at rock concerts, although this has largely been replaced by ‘smoke machines’ generating a fog of oil droplets. The fog generated by dry ice is not carbon dioxide gas, but droplets of water condensed from the air cooled by the dry ice (at approximately –80 °C).