Making catalysis safer and more sustainable for the future 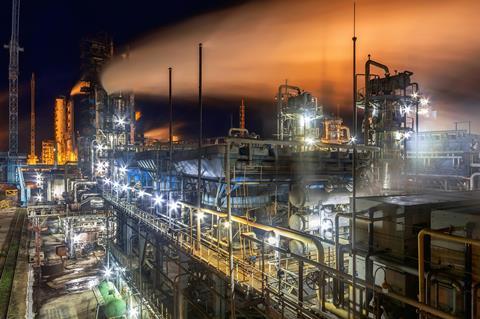 The unsung heroes of manufacturing catalysts have been used for years, but now a new generation of safer, greener catalysts is emerging

Catalysts are the unsung heroes of manufacturing. The production of more than 80% of all manufactured goods is expedited, at least in part, by catalysis – everything from pharmaceuticals to plastics.

Enzymes – nature’s catalysts – have been used to make bread, cheese and wine for thousands of years. Then, in the early 1800s, chemists noticed that passing certain molecules over red-hot transition metals sped up their reactions. These observations led to the use of transition metals and their compounds to facilitate chemistry experiments.

Transition metals are particularly good catalysts, thanks to incompletely filled d-orbitals that enable them to both donate and accept electrons from other molecules with ease.

Use this article to engage students with real-world contexts and contemporary research on the topic of transition metals as catalysts. The accompanying classroom games provide a great opportunity to familiarise students with the key vocabulary for the topic of transition metals and allow you to explore and develop their understanding, encouraging them to take a risk without the fear of getting an answer wrong.

Some early catalytic reactions using transition metals are still in use today. The contact process, developed in the 1830s, is one of the main ways sulfuric acid is made. A vanadium catalyst supports the reaction of sulfur with oxygen to form sulfur trioxide, which then reacts with water to make sulfuric acid. About 250 million tonnes of this acid is produced annually with uses ranging from fertiliser production to the manufacture of detergents, pharmaceuticals, dyes and pigments.

You don’t have one reactor, but several reactors or tubes in parallel

Another example is the Haber–Bosch process, still used to make most of the ammonia gas produced globally – over 175 million tonnes per year. First used at scale in 1913, this process uses an iron catalyst to accelerate the hydrogenation of (the addition of hydrogen atoms to) nitrogen to produce ammonia. Much of this gas is used to produce inorganic fertilisers, helping to feed around half of the global population. Ammonia is also used as a refrigerant, in the production of pharmaceuticals and to make explosives.

Go with the flow

Despite their long history in manufacturing, the discovery of new transition metal catalysts and the improvement of catalytic processes is still an active area of research. Researchers are working to develop cheaper, safer, more effective and more sustainable catalytic processes. They are also trying to discover catalysts that enable reactions that are not currently possible.

Oliver Kappe, at the University of Graz in Austria, is working to make hydrogenation reactions safer. The addition of hydrogen atoms to molecules is an extremely common reaction in industry. The food industry, for example, uses hydrogenation to convert alkenes in vegetable oil into alkanes, to produce margarine and other solid fats. And the pharmaceutical industry frequently uses hydrogenation to both reduce alkenes and convert carbonyl groups into alcohols during the production of drugs.

Familiarise students with keywords for the transition metals topic by exploring definitions in three games based on Jeopardy!, Articulate! and Taboo.

Download the instructions and game cards as MS Word or pdf and the transition metal taboo game as MS PowerPoint.

Today, most hydrogenation reactions in industry are batch processes – meaning the starting compound and the catalyst are put into a vessel, heated and pressurised with hydrogen. The product is collected once the reaction is complete.

With photocatalysts, the only energy requirement is sunlight

In flow hydrogenation, the catalyst is immobilised inside a long tube. The starting material and hydrogen are pumped from one end of the tube to the other, passing over the catalyst, and the starting material is hydrogenated as they go. The reactor is much smaller than a typical batch reactor so the smaller volume of hydrogen required makes this set-up inherently safer.

Ease of catalyst recovery is another advantage of doing catalysis in flow systems. ‘In a batch reactor, we have to filter the catalyst to recover it after the reaction,’ says Oliver. ‘Avoiding this dangerous filtration step where the catalyst is exposed to the atmosphere enormously simplifies catalyst reuse and recycling,’ he adds.

To use flow systems to conduct hydrogenations at scale, explains Oliver, multiple systems would be run simultaneously. ‘You don’t have one reactor, but several reactors or tubes in parallel. That’s the scale-up concept.’

Taylor Uekert and her colleagues in Erwin Reisner’s group at the University of Cambridge are focused on developing more sustainable catalytic processes. Noble metals, such as palladium and platinum, are excellent catalysts, but they are expensive and there are concerns that supplies of some of them may run out in the coming decades. ‘There’s increasingly a push towards noble-metal-free catalysts to reduce the cost of these reactions and make them a bit more sustainable,’ says Taylor.

Erwin’s group is developing photocatalysts to break down waste materials into hydrogen and other small, reusable chemical components in a simple one-pot process. ‘The waste can be different types of plastic, biomass, food waste or mixed municipal waste,’ says Taylor. Catalysts are already used for this purpose, but established processes require very high temperatures and pressures. ‘With photocatalysts, the only energy requirement is sunlight,’ she adds. The photocatalyst that Taylor helped design has two parts: carbon nitrite and nickel phosphide.

The group is looking to improve the efficiency and speed of the process to allow for scale-up. ‘We’re currently exploring applications for this process,’ she explains, adding that one possibility is small, delocalised applications such as producing hydrogen on a village scale for clean cooking in rural areas.

Article by Nina Notman, a freelance science writer and editor specialising in chemistry. Resources by Ian Davies, head of chemistry at Winstanley Collegeand a teacher of chemistry for over 25 years