Ancient Egyptian artists are known for developing a wider range of materials for their art. This started early in the history of the Egyptians and continued throughout their history using materials that were both local and imported. This resource looks at the pigments and materials the Egyptians used to create their art.

Ancient Egyptian artists are known for developing a wider range of materials for their art. This started early in the history of the Egyptians and continued throughout their history using materials that were both local and imported.

What materials did the Egyptians use for their statues?

Egyptians worked extensively with limestone from the cliffs of the Nile Valley. Alongside this they used other soft rocks such as sedimentary sandstone and greywacke (quartz, feldspar and dark, mineral-based sandstone), the mineral calcite (crystalline calcium carbonate) and metamorphic schist.

They also made use of harder rock such as the sedimentary diorite and granodiorite, igneous granite and basalt, and metamorphic quartzite. All these were used for statues, temples, tombs, stelae and temple furniture. To shape and smooth hard rocks such as granite, the Egyptians used copper saws and drills with abrasive sand, dolerite as hammer stones, and sand containing quartz. Evidence of this can be seen on the famous ‘unfinished obelisk’ in the Aswan quarries (Figure 1). 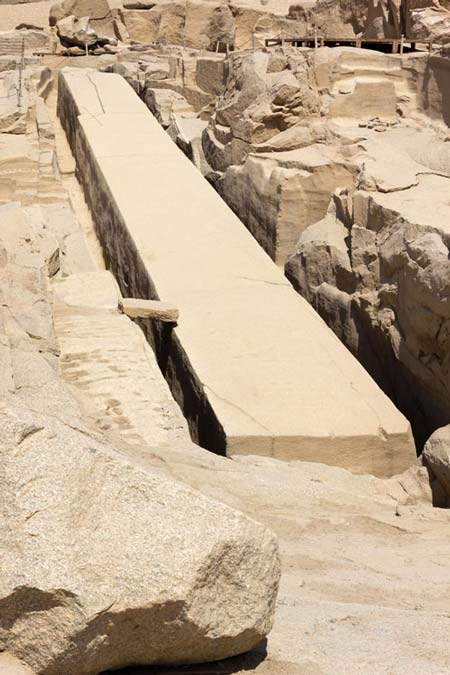 The soft stone was often covered with a plaster layer and then painted while the harder stone was often left natural and chosen for its colour in relation to use. Black rocks referred to the life-giving silt of the Nile. Because they were black they were used for art relating to life-giving situations, like Osiris, the god of resurrection. Green stones were used for living things and red, brown, and yellow to refer to sun gods.

Before stone could be painted it had to be smoothed and holes filled with plaster. On rock a layer of mud was laid then plastered with a smoother layer as the painting surface. Scenes were laid out in a marked off area gridded with squares. This was to help with proportionality of objects. The paint was painted on in flat washes one colour at a time. This gave depth and different hues to the painting.

Pigments were mostly mineral but some lake pigments were used, chosen to withstand strong sunlight without fading. The binding medium used in painting is not fully known, but egg tempera and various gums and resins have been identified.

True fresco method (painting into a thin layer of wet plaster) seems not to have been used. It seems the paint was applied to dried plaster, and then after painting a protective varnish or resin layer was applied. This explains why so many paintings with some exposure to the elements, such as those on the temples, have survived remarkably well. Small objects including wooden statuettes were often painted using similar techniques. Many Ancient Egyptian paintings have survived due to Egypt’s extremely dry climate.

The Ancient Egyptians made statues using wood from local trees such as tamarisk, acacia and the sycamore fig. These contained many knots and irregular graining so they were used for small objects. For planks and blocks they imported conifer wood from Lebanon and Syria. Many of these objects were plastered and then painted, but if the wood was good quality they applied the paint directly to the wood.

The Ancient Egyptian skills at making jewellery were also extensive and even in the Pre-dynastic period (pre 3100 BCE) they were carving lapis lazuli - a lustrous blue mineral originating from Afghanistan. This use of a rare mineral indicates the early presence of trade routes across the ancient world, from Asia to the North African region.

In the Old Kingdom they used copper and tin to make arsenic bronze. Arsenic was frequently found with copper. It is thought they added realgar (arsenic sulfide) to the bronze mixture, raising the amount of arsenic in the bronze to more than 1%. The reason for making this type of bronze could be because the arsenic hardens the alloy making it useful for tools, and gives the surface a silvery sheen. In the later part of the Old Kingdom and on into the Middle and New Kingdom, more use of malachite as a copper ore reduced the arsenic component, and they produced pure bronze.

As can be seen from the Tutankhamen funerary mask the Egyptians used gold and from other artefacts it is clear they also used silver. For the Egyptians gold was considered the flesh of the gods and silver the bones so was frequently found in religious artefacts. There are many examples of beautiful jewellery using a range of vibrant coloured enamels that look just as fresh today as when they were made. 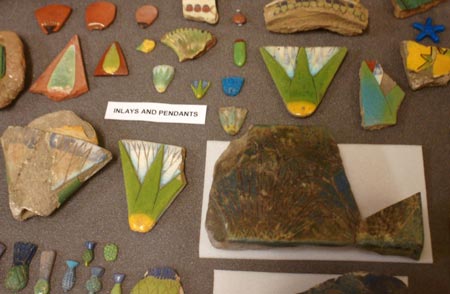 The Egyptians also manufactured many objects, from a material known as Egyptian faience. This is a quartz-based medium that could be shaped and moulded into small objects like statutes. These would be glazed with a range of minerals that would give the object colour although turquoise blue is the most common.

The Egyptians invented paper in the form of papyrus sheets, split nib reed pens and ink. They mixed soot with vegetable gum and beeswax to make crude inks. They also substituted soot with other organic material to make ink of different colours, such as red ochre to make red ink.

The ancient Egyptian civilisation seems to be one of the first in which people used cosmetics to enhance their appearance. They used kohl for decorating eyes. Kohl was made by combining soot with the mineral galena (lead sulfide). There are a few ancient Egyptian paintings showing people wearing green eye makeup. This could have been made by mixing malachite (copper (II) carbonate) with galena. The ancient Egyptians believed that applying kohl protected the wearer from evil, perhaps because they had realised that the substance had the potential to prevent or or cure some eye diseases.

The Egyptians developed drawing techniques and conventions that persisted into later centuries, such as delineation of the drawing surface using gridded guidelines. These grid lines would be snapped onto the wall using string coated in red pigment dust (like chalk lines used by modern carpenters). This grid helped the artists to properly proportion the figures and lay out the scenes. The scene elements were drafted using red paint by the master artists, that were then outlined by apprentice artists. The master artists then checked and made corrections in black paint. The final painting was painted one colour at a time.

Ancient Egyptian architects used sun-dried and kiln-baked bricks, fine sandstone, limestone and granite, and they carefully planned their buildings. The stones fitted precisely together, showing that they used simple geometry to calculate angles and straight lines.

When they created the pyramids they used sand ramps, levers and pulleys to allow workmen and materials to move up as the height of the pyramid increased. When the general structure was completed the artists started decorating from the top down, removing ramp sand as they went down. Exterior walls contained only a few small openings.

Egyptians used hieroglyphic and pictorial carvings in brilliant colours to decorate Egyptian structures, and included symbols such as the sacred scarab beetle, the solar disc, and the vulture.

Onto the base ochre colours Egyptians added dark and light blues, greens, violet, white and gold to the palette.

Most pigments in Egypt were derived from local minerals, including:

Some of the pigments can be seen in Figure 3 below. Note how rich the colour still is. 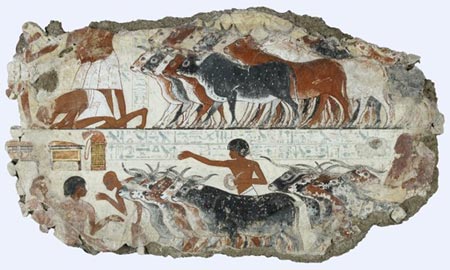 Figure 3: Nebamun inspecting geese and cattle. © The Trustees of the British Museum.

Solid lumps of these minerals were ground to a fine powder, and then mixed with a plant or animal based binder. The paint would be applied to the surface as a single layer or wash. A series of washes would be applied to create effects and different hues of colours.

The Ancient Egyptians also used a lake pigment called indigo. The word lake came not from a water lake but from the word lac (a resinous secretion). The Hindi word lakh was taken into the Arabic word lakk and the Persian word lak. Lacquer has the same origin.

A lake pigment is a dye, generally obtained from a plant, which is fixed (“stuck onto”) to a powder, then mixed with a binder to create paint. The colour comes from the dye. The binder must be inert and insoluble in the water or oil, and it must be white or very neutral in colour, so that the dye determines the colour.

The Egyptians used chalk, white clay, and crushed bones. These are insoluble calcium carbonate, alumina and calcium phosphate, respectively. Today we tend to use barium sulfate, calcium sulfate, aluminium hydroxide, and aluminium oxide (alumina), all of which can be produced cheaply from inexpensive ores. Indigo lake, as used by the Egyptians, was originally produced from the leaves of woad found in ancient Egypt.

The Egyptians also developed the use of a ‘ground’ to paint on. This consisted of a fine powder of white calcite mixed with gum arabic (a natural gum from two species of acacia trees). This development was probably due to the richness of minerals in Egypt which enhanced the range of pigments.

Most statues were painted. Likewise, when the Egyptian artists created an object from wood or metal, they would paint it.

Colour in Egyptian art was formalised into those for naturalistic paintings (landscapes, daily life and travel stories) and those for religious paintings (funerary and medical art). Paint made from a wide range of materials was laid on in flat washes, pigment by pigment, using brushes made from fibrous wood such as palm ribs or twigs bound together (Figure 4).

Figure 4: Brushes and palette from a temple painter. © The Trustees of the British Museum.

For naturalistic paintings the artist could mix and superimpose colours at will. In religious art there was a palette of only six colours, each colour linked to specific symbols and precious metals. Mixing the colours would make them meaningless. They were used next to, and in contrast with each other.

Later, around the 1st century BCE in the Ptolemaic Period (323-30 BCE), some Egyptian artists developed a technique for painting mummy portraits using hot beeswax mixed with coloured pigments. The coloured wax was applied to the surface, generally wood. This method was called encaustic painting from the Greek enkaustikos meaning ‘to burn in’, because the heat was so important for this type of paint. A wax encaustic painting technique was described by the Roman scholar Pliny the Elder in his Natural History from the 1st century CE. The oldest surviving encaustic panel paintings are the Romano-Egyptian Fayum mummy portraits from the 1st century BCE (Figure 5).

Figure 5: Mummy Portrait of girl Fayum 50-70 CE. © The Trustees of the British Museum.

This resource is part of the Chemistry and Art website. Discover more at https://edu.rsc.org/resources/collections/chemistry-and-art