In this series, Colin Baker of Bedford School provides spectacular demonstrations, designed to capture the student's imagination. The demonstrations are easy to prepare, safe to dispose of and they work.

Nothing tends to imprint chemical facts upon the mind so much as the exhibition of interesting experiments - Samuel Parkes, 1816

In September 1931, American chemist Wallace Carothers, working in the laboratories of DuPont, reported research on 'giant' molecules called polymers based on an understanding of the chemical structure of wool. His work focused on a fibre referred to simply as '66', a number derived from its molecular structure. By 1935, nylon, the 'miracle fibre', was born and was a huge success in its initial market, women's hosiery. When the US entered World War II in December 1941 the War Production Board allocated all production of nylon for military use, including parachutes and B29 bomber tyres. 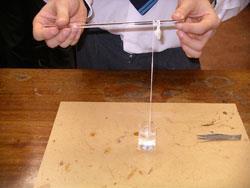 A diacid chloride in an organic solvent forms an immiscible layer with an aliphatic diamine in water. At the interface, where the two colourless solutions meet, a white, long-chain polymer is formed. This polymer film can be pulled from the interface and is immediately replaced as it is removed. If you stop pulling, nothing appears to happen - the reaction stops, but it is resumed immediately when you start to pull again. The reaction can occur over several hours. 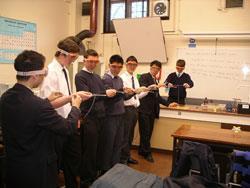 Decanedioyl dichloride and 1,6-diaminohexane are corrosive. They are harmful if swallowed or inhaled, and in contact with the skin cause burns. They are severe irritants. Cyclohexane is highly flammable and an irritant.

Pour 2cm3 solution A into a 5cm3 beaker. Carefully add an equal volume of solution B. Solution A contains the organic solvent, is denser than the aqueous layer, and therefore is the bottom layer. Grab the polyamide film (a white solid) that begins to form at the interface of these two solutions with tweezers and slowly pull it out of the beaker. Wrap the fibre around a glass rod and continue to pull. Stop the process when one of the reactants is used up.

Care must be taken when adding the second solution to avoid mixing. Demonstrate how the fibre can be pulled out in one continuous thread and then set up a competition to see which pair of students can produce the longest fibre. They should be able to produce up to 5m before the fibre snaps. Quickly they will realise that they need help to support the fibre - I divide the class into two large groups each armed with glass rods. My students have produced fibres in excess of 30m, even attempting to go round corners. You will need to limit the maximum volume of each solution to 10cm3. Students must wear gloves and avoid contact with the fibre. If the fibre snaps, then it should be wrapped up in absorbent paper. Any spillage should be mopped up with absorbent paper and put in the waste.

Polyamides are polymers in which the repeating units are held together by amide links, -CO-NH-.

Nylon-6,10 is made from two monomers, one contains six carbon atoms, the other 10 - hence its name. The 10-carbon monomer is decanedioyl dichloride (ClOC(CH2)8 COCl), an acid chloride with a -COCl group at each end. The other monomer is a six-carbon chain with an amino group, -NH2, at each end. This is 1,6-diaminohexane (H2 N(CH2)6 NH2, also known as hexane-1,6-diamine).

When these two compounds polymerise, the amine and acid groups combine, each time with the loss of a molecule of hydrogen chloride:

This polymer-forming process involving the loss of a small molecule is known as condensation polymerisation.

This polymer is made by condensing two six-carbon molecules, hexanedioic acid and 1,6-diaminohexane. In industry, cyclohexane is used to make both monomers. If cyclohexane is oxidised, the ring opens and both ends of the chain have an acid group - hexanedioic acid is formed. If this acid is neutralised with ammonia, the diammonium salt (NH4 OOCCH2 CH2 CH2 CH2 COONH4) is produced which can be dehydrated (by heating to 350°C) and reduced (using H2/Ni) to 1,6-diaminohexane. Condensation polymerisation of the diacid and diamine occurs with the loss of water:

It is possible to make nylon from the single monomer caprolactam (hexahydro-2H-azepin-2-one, 1).

Caprolactam contains an internal amide link. Polymerisation of this molecule results in ring opening and joining up to form a continuous chain:

Nylon revolutionised the textiles industry and was the forerunner for many of today's modern, synthetic fibres. It remains an important and widely used material in manufacturing.