An exciting test to differentiate between aldose and ketose sugars 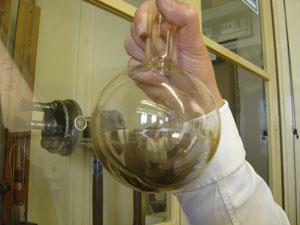 Bernhard Christian Gottfried Tollens (1841-1918) was a German chemist whose name has been recognised through the silver mirror test using Tollens' reagent. He developed this test to differentiate between aldose and ketose sugars.

Tollens' reagent is an alkaline solution of ammoniacal silver nitrate and is used to test for aldehydes. Silver ions in the presence of hydroxide ions come out of solution as a brown precipitate of silver(I) oxide, Ag2O(s). This precipitate dissolves in aqueous ammonia, forming the diamminesilver(I) ion, [Ag(NH3)2]+. Ketones do not react with Tollens' reagent.

The practical instructions and safety information for this experiment have been replaced with the updated version on the Learn Chemistry website.

Adding the ammonia to the silver nitrate solution makes the silver ion less susceptible to reduction, which produces silver in a more controlled manner.

The half-equations indicate that ammonia forms a complex with the silver ion, which is more difficult to reduce than the silver ion. This is because silver ions form more stable complexes with NH3 than with water.

If silver nitrate is used without ammonia, the silver ion is reduced so quickly that colloidal silver metal would appear. The solution would become a black, cloudy liquid.

Tollens' reagent and other similar tests, eg  Benedict's and Fehling's, will test for aldehydes but will not identify individual compounds. They all rely on aldehydes being susceptible to oxidation whereas ketones are not readily oxidised.

If identification is required, then the unknown compound must be reacted with Brady's reagent (2,4-dinitrophenylhydrazine dissolved in acidified methanol). A bright orange or yellow precipitate will indicate the presence of aldehyde or ketone.

If the precipitate is purified by recrystallisation, the melting point of the crystals can be measured and compared with tables of the melting points of 2,4-dinitrophenylhydra-zones of all the common aldehydes and ketones to identify the mystery compound. This reaction is an example of addition-elimination, which does not involve oxidation, and therefore will identify both aldehydes and ketones because both types of compound include a carbon-oxygen double bond.