3
The effect of concentration and temperature on an equilibrium
Experiments

The effect of concentration and temperature on an equilibrium

In this experiment, students observe as brown liquid iodine monochloride is formed by passing chlorine gas over solid iodine. Excess chlorine converts this to yellow, solid, iodine trichloride, setting up a heterogeneous equilibrium between these three substances. Students can then see how changing the chlorine concentration or the temperature shifts the position of equilibrium in accordance with Le Chatelier’s principle.

This experiment can be used to demonstrate a reversible reaction, a heterogeneous equilibrium and the application of Le Chatelier’s principle. It must be carried out in a fume cupboard and benefits from a white background to show the colour changes to best advantage. Attention should be directed towards the U-tube to avoid distraction by the rest of the relatively complex apparatus.

The sealed U-tube can be brought out on to the bench for better visibility provided any chlorine is not allowed to escape. Although the amount of chlorine in the U-tube is small, students with breathing problems should not inhale any chlorine gas as this could trigger an asthma attack.

Provided all the apparatus is set up in a fume cupboard beforehand and the chlorine generator flushed with chlorine, the demonstration and discussion should take about ten minutes.

Set up the apparatus in a fume cupboard, as shown in the diagram, and place about 0.1 g of iodine in the U-tube. 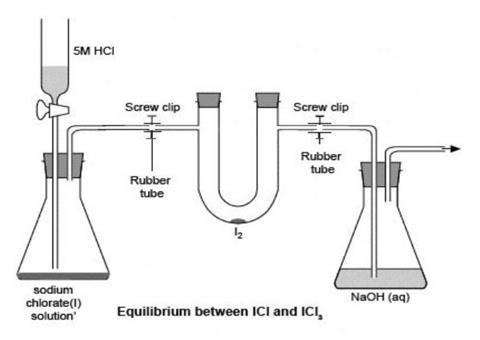 Students will probably be unfamiliar with interhalogen compounds formed here but should be able to see that their formation is feasible in terms of basic bonding theory. The influence of molecular mass on the intermolecular forces and hence the states of the three substances can be pointed out: it is reasonable that ICl is a liquid in view of its lower relative molecular mass than that of iodine, and similarly that ICl3 should be a solid.

Thus similar reversible colour and phase changes occur when the mixture is heated or cooled. An increase in temperature shifts the equilibrium to the left – an endothermic change – in accordance with Le Chatelier’s principle.

You know what works best for your learners – and we want to provide it.