4
The effect of pressure and temperature on equilibrium
Experiments

The effect of pressure and temperature on equilibrium

In this demonstration, students observe changes in the colour and volume of an equilibrium mixture of brown nitrogen dioxide and colourless dinitrogen tetroxide as it is compressed, heated or cooled. Use the experiment to introduce Le Chatelier’s principle, or encourage students to apply the principle to make predictions

For this activity, the demonstrator fills a gas syringe with an equilibrium mixture of brown nitrogen dioxide and colourless dinitrogen tetroxide. The effect of pressure on the equilibrium is shown to be in accordance with Le Chatelier’s principle by compressing the mixture and observing the change in colour intensity.

The demonstration can be used to introduce Le Chatelier’s principle or to ask students to apply it in predicting the changes expected when pressure and temperature are changed.

Preparation must be carried out in a fume cupboard. The filled syringes may be brought out onto a lecture bench in a well ventilated room for better visibility provided they are sealed and do not leak when put under pressure. The nitrogen oxides involved are very toxic and students with breathing problems should avoid inhaling them as they could trigger an asthma attack.

A white background will greatly enhance the visibility of the colour changes.

The time for carrying out the demonstration, including preparation of the dinitrogen tetroxide, should be about 30–40 minutes. More time will be needed for the quantitative extension option. 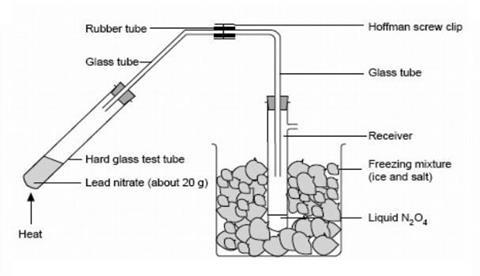 Equipment required for the preparation of dinitrogen tetroxide. 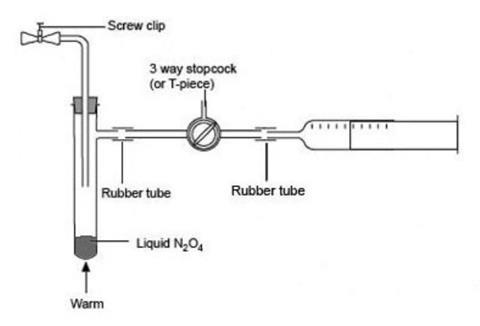 Equipment required for the preparation of an equilibrium mixture of nitrogen dioxide and dinitrogen tetroxide.

The effect of pressure on the equilibrium

The effect of temperature on the equilibrium

Increasing the pressure moves the equilibrium to the left as this decreases the number of moles of gas present in the mixture. The brown colour becomes paler.

Remind students that the value of Kp will increase with increase in temperature, whereas it will not be affected by changes in pressure despite a shift in the position of equilibrium.

By recording the volume of the gas mixture at intervals as it is warmed up, a plot of volume vs temperature can be obtained – see graph below. This can be compared with volume readings obtained from a syringe containing a similar volume of air. 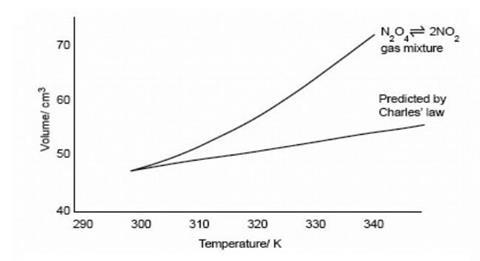 This experiment can be done without a second syringe of air if necessary. The predicted volume of an ideal gas can be worked out using Charles’ Law for each temperature reading and compared with the observed one (see graph above). For example, if the volume of the gas mixture is 50 cm3 at 25 °C (298 K), the predicted volume of an ideal gas at 50 °C (323 K) would be 50 x 323/298 = 54.2 cm3. Students could watch the demonstration and plot the points as the readings are taken. Alternatively they could do the Charles’ Law calculations as the equilibrium mixture is warmed up.