For non-linear molecules, for example pentane, there are a number of vibrations given by (3N – 6). N is the number of atoms in the molecule. Pentane, C5 H12, (17 atoms) has 45 different vibrations! 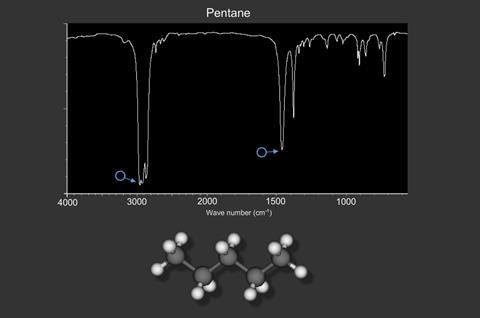 Although there are a large number of vibrational modes here, the situation can be simplified by considering that each functional group can be considered independently. So a methyl group for example should have the same normal modes of vibration no matter where it is located in a molecule. 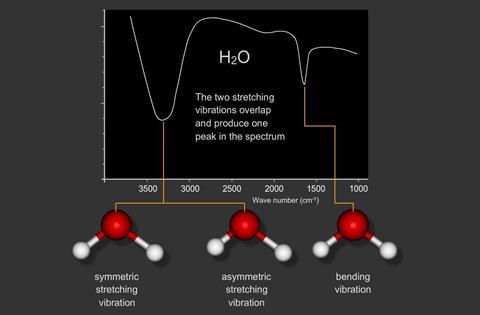 Carbon dioxide (CO2) is a linear molecule and produces just two peaks in the spectrum. 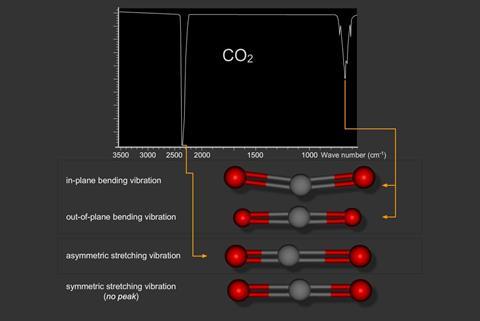 This is because the symmetric stretch does not have a dipole and the two bending vibrations (in plane and out of plane) are degenerate (i.e. of equal energy). The reason that only two peaks appear in the carbon dioxide spectrum is because the symmetrical stretching vibration does not have a change in dipole moment as it vibrates. The two bending vibrations are degenerate and vibrate at exactly the same frequency.

Other simple organic molecules produce a large number of peaks which could be considered in terms of those vibrations which correspond to CH3, CH2, benzene ring and the main functional groups e.g. alkene C=C, carbonyl C=O, alcoholic O-H, amine N-H etc. For example Vanillin. 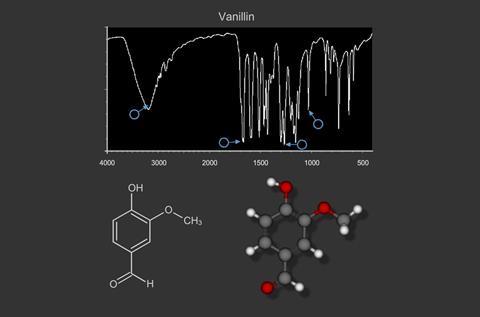 The following video shows the spin rotation of the aspirin molecule.

Predicting the spectra of new molecules can be obtained by defining characteristic bonds, as shown by the regions of the IR spectrum here: 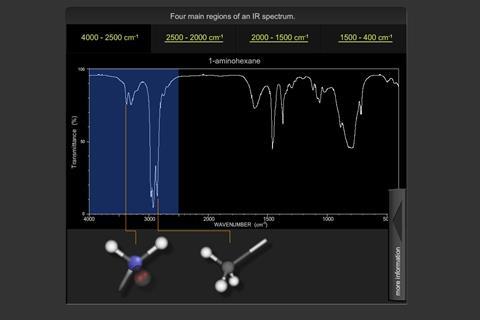 The approximate value for the frequency (ν cm-1) of absorption of a bond, can be calculated from the following (ν is referred to as wavenumber).

Where c = velocity of light, k = force constant of a bond between atoms of masses M1 and M2.

v (wavenumber) depends on the strength of the bond between the atoms M1 and M2 as given by K, the force constant.

Values of the force constant for a number of bonds are given in the table below.

This indicates that a C=C double bond is approximately twice as strong a s a C-C single bond and that a C≡C triple bond is approximately three times as strong as a C-C single bond, although there is no simple correlation between the force constant and the strength of a bond. Notice that the force constant is greater for C=O than C=C and greater for C≡N than C≡C. Clearly the bonds are stronger when the difference in electronegativity increases (and the subsequent dipole moment).

Absorption of double bonds e.g. C=O, C=C occur around 2000-1500 cm-1. These values fall to lower frequencies when bonds are conjugated (increasing single bond character). With carbonyl stretching frequencies, values are significantly affected by the inductive effect of an atom and by the mesomeric affect of groups bonded to the carbonyl carbon.

Absorptions occurring around 1500-400 cm-1 are due to other vibrations e.g. rotating, scissoring and some bending. This is referred to as the ‘fingerprint region’.