Time for a (decaf) cuppa

Organic solvent, supercritical CO2 or water? How solutions and separation techniques are essential for removing the caffeine from your daily brew 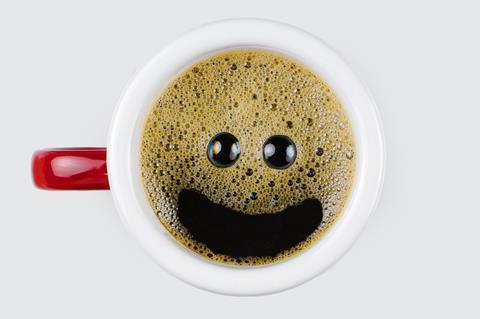 Smile! A knowledge of solvents and solutions is essential for chemists working on decaffeinating some of our favourite drinks

The British are a nation of tea lovers and coffee enthusiasts. We collectively drink over 100 million cups of tea and around 95 million cups of coffee every single day of the year.

For many, part of the joy of a cuppa – be it Earl Grey or a latte macchiato – is the caffeine boost contained within it. Both coffee beans and tea leaves naturally contain caffeine, with a typical mug of coffee containing around 80–100 mg and a cup of tea 30–50 mg.

A safe level of caffeine consumption for an adult, according to the European Food Safety Authority, is up to 400 mg a day. But an increasing number of us are moving away from hot beverages with jittery side effects. And for those that still want to experience the taste of their favourite brew, the obvious answer is to switch to the decaffeinated version.

This article provides an excellent context that can be used to add depth to a sequence of lessons on separation techniques. It illustrates how the different degrees of solubility of caffeine in various solvents is exploited in the selective removal of caffeine from two of Britain’s favourite drinks while still maintaining their delicious taste and aroma.

The decaffeination process was invented in the early 1900s by Ludwig Roselius, a German coffee merchant who founded the brand Café HAG. He found that when green (unroasted) coffee beans are soaked in benzene, the caffeine inside them migrates into the solvent.

Benzene is no longer used for this purpose, but using solvent to strip caffeine from coffee beans (and tea leaves) still lies at the heart of modern decaffeination processes.

The first stage in the Infré decaffeination process is to spray fermented black tea leaves, which would otherwise be ready for packing into teabags, with water. This swells the leaves, opens their pores and enables organic solvent to penetrate. ‘We then shower the humid tea for between one-and-a-half and two-and-a-half hours with methylene chloride,’ says Thomas. The caffeine-laden dichloromethane (with its boiling point of just under 40°C) is then driven off the leaves using steam before they are dried to reinstate their original humidity level.

Students learn how to produce a graphic to illustrate a sequence of steps, in this case showing how caffeine can be extracted. The process is initially modelled for extraction with organic solvents and supercritical CO2 before students draw their own graphic to illustrate how caffeine can be extracted from coffee simply with water. Download it alongside this article text as MS Word or pdf.

In this worksheet, students learn how to produce a graphic to illustrate a sequence of steps. The process is initially modelled for extraction with organic solvents and supercritical CO2 before students draw their own graphic to illustrate how caffeine can be extracted from coffee simply with water. Download it from the Education in Chemistry website: rsc.li/LINK

Caffeine is removed from the solvent by distillation, allowing 99.98% of the dichloromethane to be reused. The recovered caffeine is about 90% pure. ‘This is sent to companies around the world to purify it into natural food-grade caffeine,’ explains Thomas. ‘It then mostly goes into beverages, pharmaceuticals and cosmetics.’

The amount of residual organic solvent in the tea leaves is minuscule and as soon as you add boiling water to the tea anything left will evaporate off, explains Tim Bond, a tea consultant, chemist and member of the UK Tea & Infusions Association’s Tea Advisory Panel. ‘Solvent that comes into contact with food is incredibly highly regulated,’ he adds.

Some high-end brands favour a more expensive decaffeination solvent though: supercritical carbon dioxide. CO2 is a gas at room temperature and pressure, but forms a supercritical fluid when heated under high pressure. Supercritical CO2, with its gas-like viscosity and liquid-like density, is an excellent solvent for various applications. 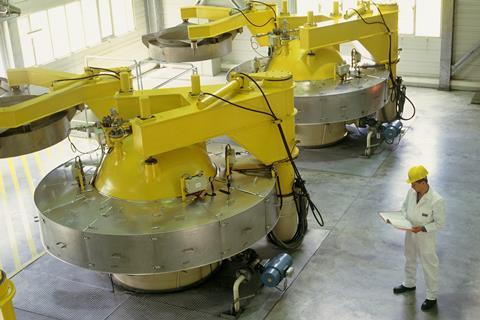 For coffee decaffeination, supercritical CO2 has the bonus of inadvertently stripping fewer flavour molecules from the beans than organic solvents. ‘CO2 is very, very selective for caffeine,’ explains Eduard Lack, co-owner of and process engineer at NATEX Prozesstechnologie, a high-pressure CO2 specialist in Ternitz, Austria. His firm builds industrial plants for coffee and tea decaffeination.

As with organic solvents, the first step is to swell the coffee beans or tea leaves with steam. These are then placed in a high-pressure vessel with CO2 for a few hours. Once the extraction is complete, the vessel is depressurised and the beans or leaves are removed for drying.

The caffeine is then removed from the CO2 to allow both to be reused. Popular methods include absorption onto active charcoal or into distilled water. Once in the water, the caffeine is crystallised out with 95% purity.

A third solvent used for coffee decaffeination, and a cheaper option, is water.

The Swiss Water process is the best known water decaffeination method. The green coffee beans are soaked for 8–10 hours in water that has been pre-saturated with all the soluble solids found in coffee beans apart from caffeine. During soaking, the caffeine molecules selectively migrate from the beans into the water. Once the extraction is complete, the beans are dried and the water passed through a carbon filter to recover both the caffeine (for selling onwards) and the aqueous extract for re-use. Because the extract is already saturated with flavour compounds, flavour loss from the beans during decaffeination is minimal.

Tea leaves are too delicate to survive hours of soaking in water, but Thomas says Infré is currently developing a water-based tea decaffeination process.

A role for chemists

None of the above methods completely remove the caffeine in tea or coffee; decaffeinated tea leaves and coffee beans typically contain 1–2% of their original caffeine content. Measuring levels of caffeine, any residual organic solvents and various other legislated standards in decaffeinated tea leaves and coffee beans falls to the quality assurance and quality control teams at the decaffeination facilities. Many of these are chemists.

Chemists also play an important role in keeping decaffeination processes running smoothly and developing new techniques. ‘Chemistry is a really good discipline to have anywhere in the food industry because if you understand what you’re trying to achieve, you can then guide the mechanical and chemical engineers to do the processing,’ explains Tim.