Why you need A-level chemistry to study medicine

2
Why chemistry is essential for studying pharmacy at university 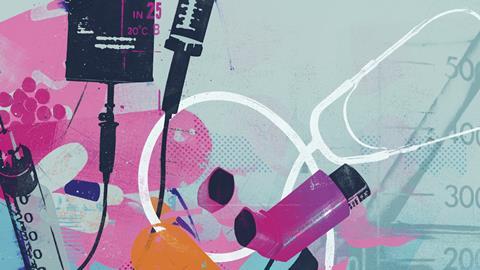 Why chemistry is essential for studying pharmacy at university

Chemistry is key for making drugs and understanding how they work

A boy is carried in to hospital, barely able to breathe, wheezing and gasping. Only an hour later he walks back out as though nothing had happened. How could he be so ill one minute and walking the next? The answer was an injection of adrenaline that relaxed the bronchial muscles and opened the airways. An adrenaline injection is a pretty unpleasant experience, bringing a sudden increase in heart rate and tremors, as though you’ve just been through a massive fright. Added to that, adrenaline’s effect doesn’t last very long. Before 1969, adrenaline or ephedrine were used to treat asthma, and asthmatics suffered from serious side effects. From 1969, this boy – my brother – was able to attend school more regularly and even play sport and we had no more middle of the night trips to hospital. So what changed? And what does chemistry have to do with it?

The introduction of the Ventolin inhaler in 1969 was the culmination of years of work, with chemists collaborating with doctors, nurses, pharmacists, pharmacologists and physiologists. They reasoned that by modifying the chemical structure of adrenaline, they could develop a new drug that would last longer and reduce unwanted side-effects on the heart, while still being effective in the airways. 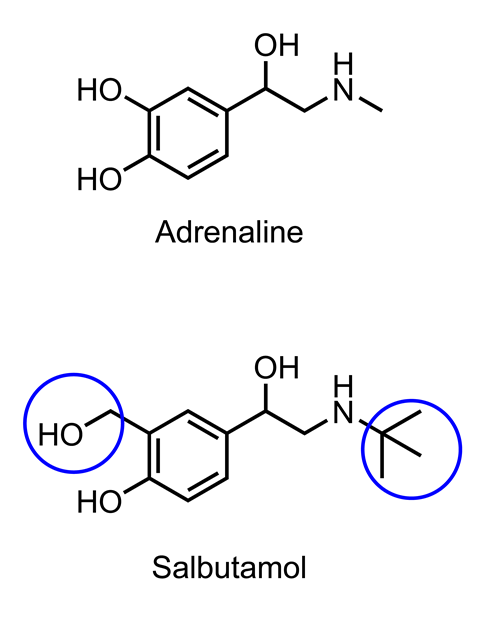 The active part of the salbutamol molecule (the pharmacophore) is very similar to that of adenaline. The functional groups that help it resist enzymatic breakdown are circled

The action of adrenaline is short lived because it is quickly broken down by an enzyme. Chemists, therefore, tried to synthesise chemicals that would be more resistant to enzymatic degradation. They designed a range of compounds with modified structures that would not be able to fit into the active site of the enzyme. One of these, salbutamol (trade name Ventolin), was the result and lasts for about four to six hours in the body.

The additional functional groups affected the way salbutamol interacted with receptor proteins in the body. It turned out that it could dilate the bronchi at much lower concentrations than it affected heart rate. This observation, along with the effects of other selective drugs, demonstrated that there were different types of receptor proteins for adrenaline in the heart compared with lung tissue. This idea that a drug works by interacting through intermolecular forces in a very specific manner with a particular type of receptor protein underpins the whole of modern pharmacy. Furthermore, understanding the effects of drugs with different chemical structures has helped us to understand how the body works.

To make these molecules with different chemical structures, medicinal chemists develop an extensive knowledge of the characteristic reactions of different functional groups and need to understand how to combine these reactions in a sequence to make the desired structure. The synthesis of drug molecules often involves several steps – the challenge is to produce a high yield of the right structure in as few steps as possible, using as little in the way of energy resources and expense.

Historically, many herbal extracts were prepared by boiling plant material in water or by infusing in alcohol and we now understand this in terms of solubility. Many drugs derived from plants are alkaloids that contain amine groups. These compounds can be extracted using a combination of water and a non-polar solvent and then adjusting the pH to manipulate the charge on the amine groups and therefore the extent to which they partition into the aqueous phase. Extraction methods often use weaker acids and bases such as tartaric acid and sodium bicarbonate to modify pH. Strong acids and bases are avoided because they can react more readily and change the structure of the molecules being extracted. In the first step, the pH is adjusted to at least two units below the pKa which means that the amine groups are predominantly charged and concentrate in the aqueous layer along with other polar molecules. The non-polar molecules concentrate into the organic layer. The two layers are then separated and the aqueous layer is collected and the pH increased so that the amine groups are now uncharged. A fresh organic solvent is added and the uncharged molecules move into the non-polar layer, which can be separated and then evaporated to leave the desired product, although further separation using chromatography may also be required.

Studying pharmacy also involves understanding how drugs can be formulated – made into tablets, capsules, injection solutions, skin patches, gels or aerosols. In the 1960s there was a sudden increase in the number of epileptic patients reporting symptoms of double vision and vomiting, which were consistent with anticonvulsant intoxication in patients who had previously been responding well to the drug. After some detective work it transpired that the drug manufacturer had recently changed the manufacturing process and used lactose as a binding agent instead of calcium sulfate dehydrate. How could the supposedly inert binding agent cause such a dramatic effect? The answer is that lactose is readily soluble in water whereas calcium sulfate took longer to dissolve thus the lactose formulation released the active ingredient more quickly leading to much higher concentrations of drug.

This control of dissolution rate can be used to advantage in preparing ‘slow-release’ formulations of drugs such as diclofenac, an anti-inflammatory and analgesic. Different polymers, such as methylcellulose, can be included in the formulation to slow down release of the drug and therefore allow once-daily dosage. If it wasn’t for this slow-release formulation, the diclofenac would be absorbed and then cleared from the body in a matter of a few hours.

Particle size and shape are important determinants for slow release formulations. The drug can be incorporated into different sized particles of binding agent and the smaller ones will dissolve first leaving the larger ones until later. Alternatively if the drug is spread throughout a larger sized particle then as the binding agent dissolves the drug will be released.

Nowadays, the nature of the so-called inert ingredients – the excipient – of a formulation must be thoroughly tested. The excipient may include substances to increase the viscosity of a syrup, anti-oxidants or a coating to protect the drug from oxidation or the effect of stomach acid.

Why you need A-level chemistry to study medicine