In association with The Wolfson Foundation

Try this worked example of a Chemistry Olympiad question, identifying a range of compounds using spectroscopy

In this question from the 2011 UK Chemistry Olympiad round one paper, students use information about a series of compounds – including their chemical, structural and spectroscopic properties – to identify the compounds and, in some cases, to draw their skeletal formulas. The question is accompanied by a video walkthrough to help students if they get stuck or want to check their working.

The question is of low difficulty, and covers the following chemistry topics:

What’s on this page?

How to use this resource

Find out more about how to use Chemistry Olympiad worked answers.

If required, use the additional information about NMR spectroscopy provided to help you answer this question.

Your task is to identify compounds 1–7 using the information given below. You should draw the skeletal formula of each compound and give the systematic names of compounds 1–4. 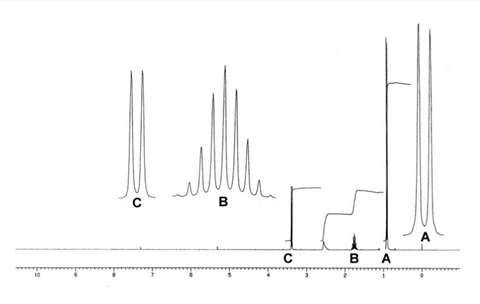 The 1H NMR spectrum for an unknown compound.

NMR spectroscopy is a technique that reveals the number of different environments of certain nuclei in a molecule.

Thinking about the symmetry present in a molecule is important when interpreting NMR spectra.

Both carbon atoms (13 C) and hydrogen atoms (1 H) give NMR signals (ie are NMR-active nuclei). Each NMR-active nucleus in a different molecular environment will give rise to one signal with a characteristic chemical shift (measured in ppm).

The relative intensity of each signal in a spectrum is proportional to the number of nuclei in a particular molecular environment.

1 H NMR is complicated by coupling. If a hydrogen nucleus is within three bonds of another hydrogen nucleus which is in a different molecular environment, instead of appearing as a single peak, its signal is split into a number of peaks.

For example, the spectrum for compound 3 shown opposite, indicates that there are 4 different 1 H environments. The relative intensities of the peaks are 2:1:1:6.

The splitting patterns for peaks A, B and C are shown in larger scale.

The skeletal formulas for each compound, and the systematic names of compounds 1–4, are given below. 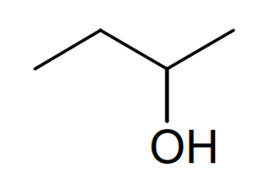 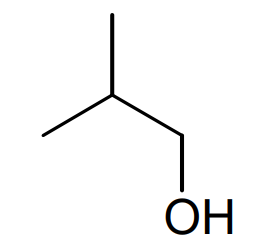 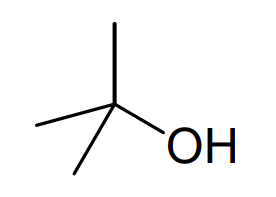 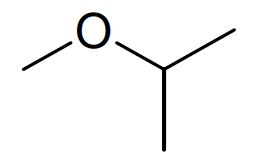 Watch this video walkthrough to find out how to answer question 4 from the 2011 UK Chemistry Olympiad round one paper.

This question is all about solving a puzzle using spectroscopy, specifically 13 C and 1 H NMR spectroscopy. You really need to have studied NMR before tackling the question. However, if you haven’t, some extra information is provided to help you with your answer.

The question begins by telling you that compounds 1–7 all have a molecular formula of C4 H10 O. You will be aware of four types of compound that contain a single oxygen atom. These are:

Since the formula of the compounds is C4 H10 O, this means that they contains the same number of hydrogen atoms as a straight chain alkane with an equivalent number of carbon atoms; they fit the general formula of Cn H2n+2. Therefore our compounds can’t contain any double bonds; they must be fully saturated. This rules out the possibility of our compounds being either aldehydes or ketones. Therefore compounds 1 –7 must be either alcohols or ethers.

To help identify each of the possible compounds, the best step now is to draw out all possible structures with a formula C4 H10 O. If we do this we find that there are four possible alcohols and three possible ethers.

If we now look at the second bullet point, this tells us that compounds 5 –7 have lower boiling points than compounds 1 –4. From our chemical knowledge, we know that alcohols generally have higher boiling points than molecules with a similar relative molecular mass owing to hydrogen bonding between the molecules. Therefore we can expect the alcohols to be compounds 1 –4 and the ethers to be compounds 5 –7. This is supported by the information given in the third bullet point where we are told that compounds 1 –4 have a broad absorption at 3300 cm-1 in their infra-red spectra. This corresponds to the stretching frequency of an O-H group in an alcohol.

So we now know that compounds 1–4 are the alcohols and compounds 5–7 are the ethers. We must now work through the details given for the individual compounds and match them to the possible structures.

Let us now look at the identification of the alcohols, compounds1 –4.

The fourth bullet point tells us thatcompound 2 can exist as optical isomers. For a molecule to be able to exist as optical isomers it must have four different groups attached to any one carbon atom. Looking through our possible alcohol structures, only one of the structures matches this requirement. If we look at the structure on the top right we can see that the carbon atom highlighted with an asterisk has a methyl group, a single hydrogen atom, a hydroxyl group and an ethyl group coming from it. Therefore this is a chiral carbon atom and hence this alcohol can exist as optical isomers and so must be compound 2. Looking back at the start of the question, we see that we need to draw the skeletal formula of each compound identified and give the systematic name of compounds 1 –4. If you have not come across skeletal formulae before, the skeletal formula of a molecule is a drawing of the molecule in which all the hydrogen atoms are removed from carbon chains, leaving just a carbon skeleton with functional groups attached to it. The carbon atoms are not drawn in. Instead, it is assumed that there is a carbon atom at each junction between bonds in a chain and at the end of each bond unless there is something else already there eg a hydroxyl group, OH. Therefore we can draw compound 2 as shown. Compound 2 can be named as butan-2-ol as the longest carbon chain contains four carbon atoms and the hydroxyl group is on carbon-2.

The fifth bullet point shows us the 1 H NMR of compound 3. From the spectrum, we can identify four different peaks, three of which are labelled as A, B and C. Since there are four different peaks in the 1 H NMR spectrum, this alcohol must have hydrogen atoms in four different environments. This is only true for one of the possible alcohol structures, the one at the bottom right. We can confirm this identification by looking further at the integration and splitting patterns for the peaks. If peak B has an integration of one proton, then peak C corresponds to two protons and peak A to six protons. If we now look at the, peak C must be due to the two protons on carbon atom, C -1, split into a doublet by the single proton on C -2. Peak A must be due to the six equivalent protons on the two C -3 carbon atoms. This peak is again split into a doublet by the single proton on carbon atom C -2. Finally, peak B is due to the single proton on C -2. This is split into a triplet by the two protons on C -1 and a septet by the six equivalent protons on C -3. As a result, it appears as a nonet with a peak ratio 1:8:28:56:70:56:28:8:1. Therefore we can confirm the identification of compound 3 and draw its skeletal structure. Compound 3 can be named, 2-methylpropan-1-ol. Notice that the hydroxyl group takes preference in the numbering.

The next bullet point down, tells us that the 1 H NMR spectra of compound 4 consist of two distinct signals meaning that compound 4 must contain only two types of non-equivalent protons. Therefore compound 4 must be the alcohol in the bottom left, one signal due to the hydroxyl group proton and one signal a result of the nine equivalent protons on the methyl groups. Therefore we can confirm the identification of compound 4 as 2-methylpropan-2-ol. By a process of elimination this then allows us to identify compound 1 as butan-1-ol.

Finally, we need to identify the ethers, which we know to be compounds 5–7, and we can do this using the last two bullet points in the question.

Finally we are provided with some 13 C NMR data to help distinguish between the last two ethers corresponding to compounds 6 and7. The 13 C NMR spectrum of compound 6 contains four distinct signals whereas the 13 C NMR spectrum of compound 7 shows only 3. Therefore compound 6 must bemethyl propyl ether (or methoxypropane), the four non-equivalent carbon atoms highlighted here in pink, yellow, blue and green and compound 7 must bemethyl isopropyl ether (or 2-methoxypropane) in this case. All that remains now to complete the question is to correctly draw out the skeletal formulae of each of these compounds.